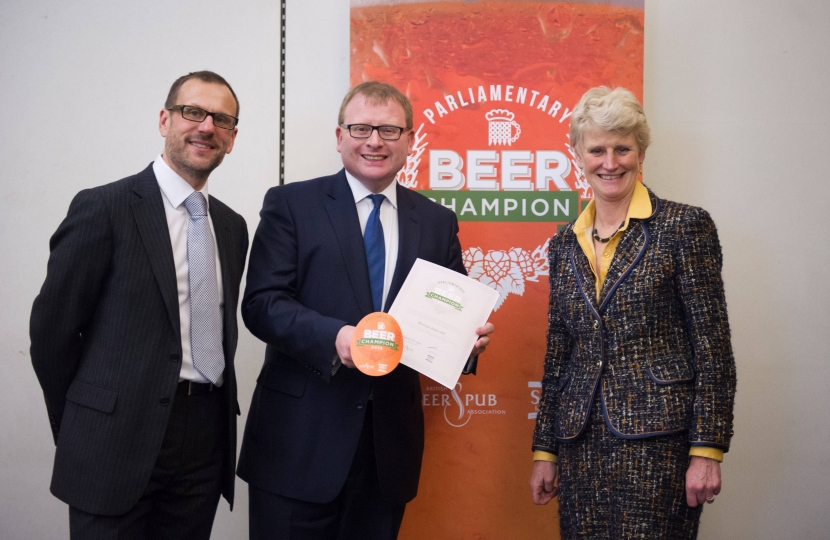 Local MP Marcus Jones, who champions Britain’s beer industry, has been honoured with a unique award in Parliament. Marcus was presented with a certificate and souvenir pump clip by the British Beer & Pub Association and SIBA, the Society of Independent Brewers.

The special award is a joint initiative from the BBPA and SIBA, who wanted to recognise the role of MPs who supported Britain’s national drink during the 2010-2015 Parliament. It recognises acts of advocacy in Parliament, in votes, supportive motions, and debates.

In particular, the award highlights Marcus’ support in securing historic consecutive cuts in beer duty in the 2013 and 2014 Budgets, helping to safeguard jobs and investment, and keeping beer affordable for consumers. In addition, Marcus fought in Parliament to have the unpopular Beer Duty Escalator scrapped by the Chancellor, George Osborne MP.

Marcus is also supporting a third, consecutive duty cut in this year’s Budget, as beer and pubs support vital jobs in the town, and significant support to the local economy.

Commenting, Marcus said: “I was humbled to receive this award from the British Beer and Pub Association and the Society of Independent Brewers. I am proud to be speaking up for pubs here in Nuneaton. Well-run community pubs play a crucial role in local life and make a huge contribution to the local economy – with each injecting around £80,000 to the local area every year.

“Whilst it may sound trivial, over 1,300 people in Nuneaton are employed either directly or indirectly by the beer and pub industry. I’ll continue to do all I can to support this important industry as the town’s Member of Parliament.”

“MPs of all parties made a huge difference in achieving the historic duty cuts in 2013 and 2014, and deserve our thanks and recognition. We are delighted to honour their contribution to this achievement. I hope even more MPs will join calls for a third duty cut in this year’s Budget on 18th March.”

“We are enormously grateful to the MPs whose support for British beer over recent years has created a far more optimistic outlook for our industry.  As a result of the consecutive beer duty cuts, our members feel more confident about the future of British brewing and are investing in their business and creating local employment, with an estimated 1,600 new jobs in SIBA breweries last year.

“With at least one independent brewery now operating in almost every parliamentary constituency, the Beer Champions announced today will I’m sure be invited to celebrate their success in their home town, with a pint of great, locally brewed beer.”