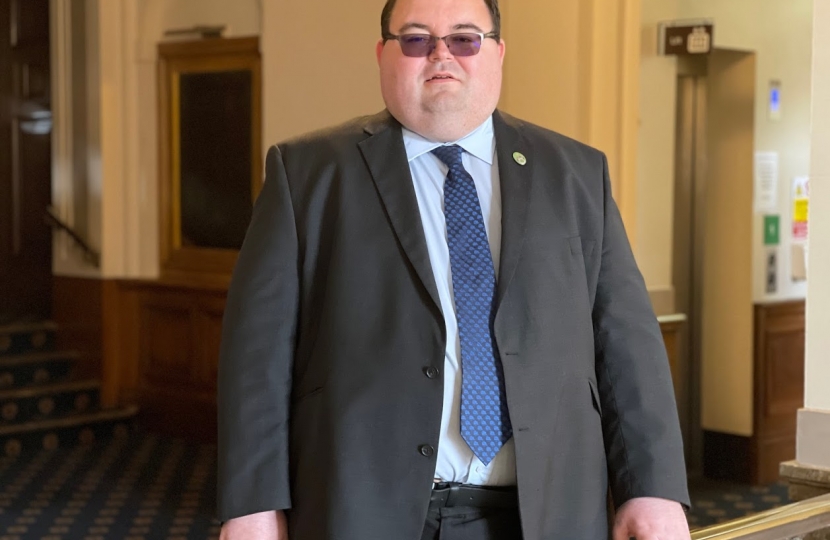 At an Extraordinary Council meeting on 30 June 2021, and following a meeting with the Glendale Regional Manager earlier that day, Cllr Kris Wilson responded to a question from a member of the public about the poor standard of grounds maintenance performance.

You can read Cllr Wilson's detailed statement below or watch the video clip:

I’d like to thank Mr. Margrave for his question. His concerns about the state of our grounds maintenance across our Borough are shared by many residents and, indeed, many members of this Council.

Firstly, I can confirm that this is Labour’s legacy. The current grounds maintenance contract was drafted, tendered and signed under the previous Labour administration. Whilst there are many things I would like to do after just 6 weeks in control – and there are many we have already done – completely re-writing the contract is simply just not possible.

To answer Mr. Margrave’s second point about additional funding for Glendale I can confirm that the answer is none.

And there shouldn’t need to be any extra funding for Glendale.

Glendale tendered for a contract and provided a price for how much it would cost to maintain Nuneaton and Bedworth’s open spaces and we expect them to stick to their contractual promises. Additional money shouldn’t be needed to rectify this problem – it is Glendale performing their contract according to specification.

According to the terms of the contract, Glendale will not be paid until a job has been completed. It is in their interests to complete a job so that they get paid for it. And in this instance, this is a case where we do want to hand over the money. The contract is simple – no performance then no payment.

Unlike the previous administration, as Leader I have insisted on a zero-tolerance approach to the issue of default notices. Whilst none were issued last year, we have already issued 5. Unless Glendale starts to operate to spec then more will be issued.

Furthermore, I have called in Glendale’s Regional Manager, today as it happens, to emphasise that this new council and its residents expect and demand better. What arose from my discussions with Glendale today alongside Councillor Gutteridge, as the Portfolio Holder, is that they accept they are not performing to specification. There have been issues around Covid and the secure bubbles that they need to maintain operational performance. However, we did emphasise that this is not good enough, that they have tendered for a contract and we expect better. Indeed, I emphasised to him the zero tolerance policy that I had asked officers to pursue, and I have insisted on a recovery plan for the grounds maintenance performance. They have given me an assurance that they will be back up to spec by July 31st and if they can bring it forward any further, they will do so. They have experienced some recruitment and retention problems, and speaking from experience outside this council, I do know there is an issue with some people and agencies being able to supply the necessary staff. They have taken on additional staff (six additional staff I believe), although I was unfortunately informed today that one person was taken on as agency and didn’t turn up, so there is an issue with recruitment and retention and this is an issue I have asked them to look at as a long term solution to the problem.

Cllr Gutteridge, as the new Portfolio Holder, has been having daily meetings with our officers to enforce the contract. Enforcement of the contract is what is needed here, not more money.

Finally, I would also make a plea to the residents of this Borough. I know that you are angry and frustrated with the situation. But there have been isolated incidents of residents taking out their frustrations on Glendale staff. Please, don’t do this. It is not their fault. The decision lies with people far above their pay grade. I can assure residents that we are having those conversations with the relevant Glendale managers, and we are determined to get this contract back into compliance.

This is an issue that we take extremely seriously Mr Mayor and it is something we have inherited as a new administration, and we are pulling out all the stops to get this contract back into compliance, and whilst we left on amicable terms, I did leave it that if necessary, I will get them back in for further conversations, and if further default notices are required, we will do so. But also, residents and Councillors alike, have reported issues through the customer services provisions at the Council, and this has indeed enabled us to issue those five default notices already because we have the cold hard facts and statistics on which to base those default notices, so we are a Council that is operating, using the facts available to us and having that information has enabled us to issue those notices, and if necessary we will issue more; we don’t want to, but if we have to, we stand ready.